Strother’s Management Team is a deliberate unique blend of experienced talent and passion for service. Each member is trained to interactively share and build each other’s skills as people oriented leaders who pay close attention to all phases of daily project management. 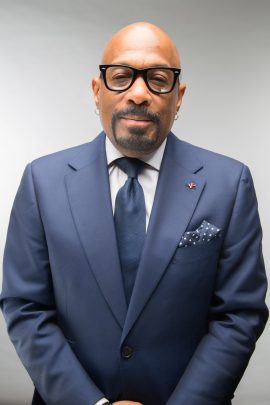 Ernest Strother is Co-founder, Chairman, and Chief Executive Officer (CEO) of Strother Enterprises, Inc., which provides contract food service management solutions to a variety of industries, including sports & entertainment, government, healthcare, and education. For more than 30 years, he has provided consistent inspired direction and is recognized for his visionary and strategic leadership. Under Ernest’s leadership, he has developed and executed a seamless executive management team, collaborating closely with the President & COO and Executive Vice President to continuously evolve Strother Enterprises’ model of excellence throughout all divisions.

Earlier in his career, Ernest held corporate positions in sales and marketing with such noteworthy companies as Proctor & Gamble, Air Products & Chemicals, and The Philadelphia Tribune. His prior positions cultivated a foundation and ignited his passion for business development, field operations, sales forecasting, marketing, and financial analysis along with continued application of innovative metrics that have driven Strother Enterprises’ success to this day.

Ernest is a veteran of the United States Air Force and served in Vietnam, along with his twin brother, Robert Strother. He graduated with a Bachelor of Science degree in Food Marketing from Saint Joseph’s University in 1972 and attended the MBA program at Drexel University.

Ernest is married with two adult children and resides in Philadelphia.